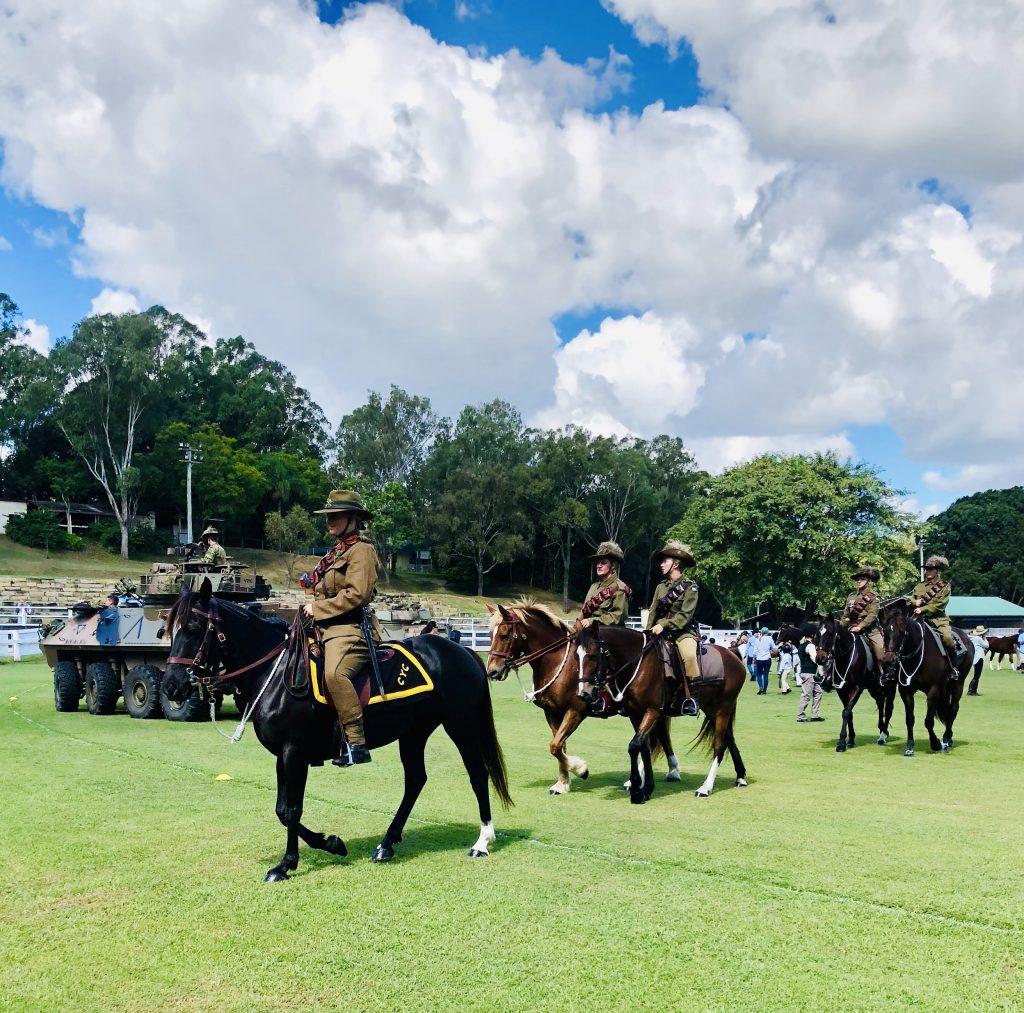 Brookfield Pony Club has again been asked to participate in this year’s ANZAC day remembrance event at the Brookfield show grounds with a led troop of Pony Club horses and ponies. This re-enacts the donation of horses to the war effort, with local horses being led to the grounds for recruitment.
The day’s activities are based around the Shell Green cricket competition and commemoration event being organised by the RSL and Brookfield Cricket Club on Anzac Day at the Brookfield Showgrounds. This event acknowledges the Shell Green cricket match played at Gallipoli during preparations for its evacuation, the contribution of Sri Lankans who fought alongside the ANZACs, the history of  the local community’s commitment to supply horses for the war effort, and the sacrifice of past Kenmore State High student Mathew Hopkins who was killed in Afghanistan in 2009. The led horse troop re-enacts the donation of horses to the war effort during World War I at the Brookfield Showground, with local horses being led to the grounds for recruitment. Pony Club members lead their horses in pairs in a troop line, led by riders of the Light Horse, and stand behind the Army XI and Brookfield cricket teams along with Armoured Vehicles for the remembrance, including recital of the Ode and the Last Post, before the cricket match. Below are the details of the event, although times may alter slightly.When                   Thursday 25 April at 10.15 am for the parade at approx 11.00 am and completion around 12.00Where                  Parking of floats in the cemetery paddock and gathering near the gate to the sand arena for lineup and practice with instructorsWho                     Horse to be presented in neat natural presentation in bridle; rider to be in formal pony club uniform including helmet.  Parents can accompany junior riders as required and medals can be worn [right side for those wearing medals on behalf of loved ones]
If you are interested in joining in the Parade and require any further details – please contact Sandy Pollitt at sandypollitt@hotmail.com
Posted in Events, News
← April Muster Sunday 18thMay Newsletter 2021 →